My examples of "Assumption at 0", Research, Primary Source and Historical Fiction

I have loved art since I was a kid. I was born in Philadelphia and we went to the Philadelphia Museum of Art a lot, and I always returned to the Museum of Rocky when I used to visit relatives.

The art works I remember the most from the museum were: a painting of bathers by Renoir and an iron with spikes on it, by Man Ray. I remember the first time I saw it, I thought that’s art?

Then I went to college and learned about Dadaism and readymade sculptures. I became very fond of Marcel Duchamp, who lived in Philadelphia. The Philly museum had a lot of his sculptures and some of his paintings in Philadelphia.

After going to grad school for art and teaching art and art history for many years, I have spoken a lot and had my students mimic dadaist artist I still never got into Man Ray’s art. I did know he did make several images that showed the naked back of women and some men with “f-holes” on their backs as if they were instruments. I thought it very silly and some what contrite.

Truth be told I found the arrogance of photographers silly and contrite. I consider myself a photographer, I started as a child (age 4) and always had a camera in my hands. For fun or for work this was something I was good at. I was better than others, in “capturing images”, developing the film and printing the images. Through hard work and self critique I developed an eye for composition and I knew the capabilities of photography. I was not good at spelling. I was teased and made to feel stupid in class. However in 9th grade yearbook, I used photography as my equalizer. I was really good, better than most though college and into grade school, even as a wedding photographer.

I always wanted to severely alter my images so that they would be how I wanted them, I bought filters, used infrared film, and utilised all the dark room tricks, but I could not change the reality enough to satisfy my need to create something new. So I bit the bullet and learned to draw, paint and print. I loved it. This was in 1994. In 1997 Photoshop came out but I was already making art, drawing and painting. Art photographers say “I made an image”. I’m thinking bullshit, you took a 60th of a second out of your day and pressed a button. Photography is not art, I am great at it, it can’t be real art, I would often think to myself. That is some self loathing, that I might need professional help with.

Basicly I don’t think photography is art, its too easy. Readymade sculptures are on this border as well. Just juxtapose two objects and glue or screw them together. These are the domains of Man Ray. I would just say his name when introducing my students to Dada or the Paris art scene of the early twentieth century. I talked Duchamp up with his “Urinal”. I love Raoul Hausmann’s heads and collages, but I never got in to Man Ray the photographer that I though was no better that a clever art student arrogantly comparing his photos to paintings.

I have mellowing and I think I am starting to see something in Man Ray I never noticed. This project, “Twentieth Century Box” got me thinking about ideas, politics and events that I judged when I was younger in the twentieth century and even into the twenty first century. I first thought about writing about Viet Nam, a subject that I know a lot about and have very strong opinions and actually harbor strong feelings even to day about the injustice of it all and how history is being rewritten as we speak to turn that war into something that it wasn’t. Then I thought how about the Lusitania, that is a great story and conspiracy theory that I could sink my teeth and political venom against. However I am trying to mellow, I want to mellow. I sat back and though this is an opportunity to reevaluate and ideas, events, person or persons that I thought I knew.

A student in my friends classroom was putting f-holes the back of a doll, I thought to myself: “Man Ray lives on!” then I thought maybe I judged him to fast, maybe he is relevant, maybe I’m the arrogant ass that dismisten Man Ray as just a picture taker. I am going to find out the truth and the fiction of Man Ray, a man that I might come to Identify with and some how like him and his work anyway.

My Research for the Book

Three things that Man Ray said about himself fueled my research:
“The two reasons I make art, Liberty and Pleasure” Man Ray.  I assume Liberty means that he was not afraid to shock people. Liberty might also mean making art gave him money and fame to enable him to do as he pleased and this brought him pleasure.
“Painting and photography are my mediums I can do the same in both.”Man Ray. I think this was a rationalization, his paintings were derivative even in his own times, flat and gimmicky. His photography was experimental, creative and powerful, he brought an artist spark to a scientific medium. In a time of Modernism where originality was the most important attribute to ones work he was the ART Star of Photography of the early twentieth century.
“Life and death can be a joke” Man Ray. This was his “Shocking” gimmick. That he casually referenced death. He was not alone, many artist at the time, Dadaist and Expressionist both were fixated on the horror of world war one that they had just lived through.
However It seemed like he avoided death by where he chose to live his life. born 1890 in Philadelphia 1920 moves to paris he wa 50 in 1940 moving to LA
AND IN 1951 HE MOVED BACK TO PARIS AND died in 1976 at 86
Man Ray did not like the way other people took photos of his work so he bought his own camera to do it himself. This was his birth, he fell into his future just buy buying a piece of technology. His life changed, he was all of a sudden great at the thing that was of secondary importance to his real passion. He would fight the tension the rest of his life. I saw this in him and stayed away from studying him, because of this. I am a mediocre painter, but good at aspects of formal art too.
Man said, “The artist is his own work of art.” He started to reject images of the human form, he called a photo of an egg beater “La Femme” . He sailed from New York to La Have then to Paris ato meet with the dadaists. They loved him but he did not sell anything in his first show. He started to get anxious during the opening and he quickly made, “Gift” as a joke and attack on the fact that he was a flopp. “Gift” was simply an iron with nails on the soleplate.
He turned to  photographer and the technology that the french developed but did not utilized to it’s full artistic potential. Ray made images without cameras called Ray-o-graphs they were like x-rays of normal objects, he sculpted with light. Duchamp was happy he ditched painting, “no more sticky paint” Man Ray said. “I photograph what I can’t paint, what is in my mind.” This is something that many artist and art students say, and while he said it as a manifesto, I believe it was a rationalization for not being able to use the medium of paint in the way he wanted. In a sense who cares, he made great evocative art, he cared, he wanted to he in the canon of western painters.
1923 made a film, direct printing and made a film like he made a 3 min. film in one night.
“Return to Reason” his film http://youtu.be/zwLD5WWQptw,
He was everyone’s American friend, everyones photographer in Paris. He did portraits of everyone and finally rented a studio. Vogue and Vanity Fair bought portraits and commissioned him to photograph celebrities. He got rich. He had a lot of assistance to, all young pretty women. The one that stands out was Lee Miller, artist and photographer she made a name for herself in her own work.
He set the lighting before the customer arrived, he said, “you should not smile, close your eyes and then open them suddenly! hold a prop to relax” He used plane background, he played with shadows, objects too, only 12 shots, 3 meters from the subject to reduce distortions, he touched up photos with pencil. What makes a good photo is the play of contrasts, light and dark, silhouette and subject, a face and a mask, like chess different between light and dark were some of his mantras.
Solarization, he said he discovered this technique by accidentally exposing the film to light before the fixxer stabilized the negative. An effect that made it look like they were drawings. inverting whites and blacks.
He put as much work into his commissioned work at his art photography. Every material had its own lighting. his fashion photography made him money and inspired his art. He always had money from photography but he would have preferred to be rich from his painting. His photographs were the same as his paintings, to show an idea rather that an object to show and a dream rather than an Idea. He photographed not nature but his imagination. He did not make uninteresting places interesting he created something interesting to photograph.
In his paintings humans are symbols, but in the photos there are bodies. Inspired by Marquis de Sade fascination or obsession or just a shocking motif to hang on to that would enhance his crazy reputation. He is like the first modern art student. Amputations, straps, torture, scars and groups of people tied together. He used his wooden dummies from figure paintings, climbing on Duchamps bottle rack, showing a dream over taking an idea.
He wanted to condense the drama  of  life into one photo “The Pray” hands behind the womans butt, praying for forgiveness, praying for ones life.
MAN RAY was an artist, not a painter, not a photographer, not a designer, or even a sculpture, he was an artist. If he was around today he might be something special or just one on millions making memes. 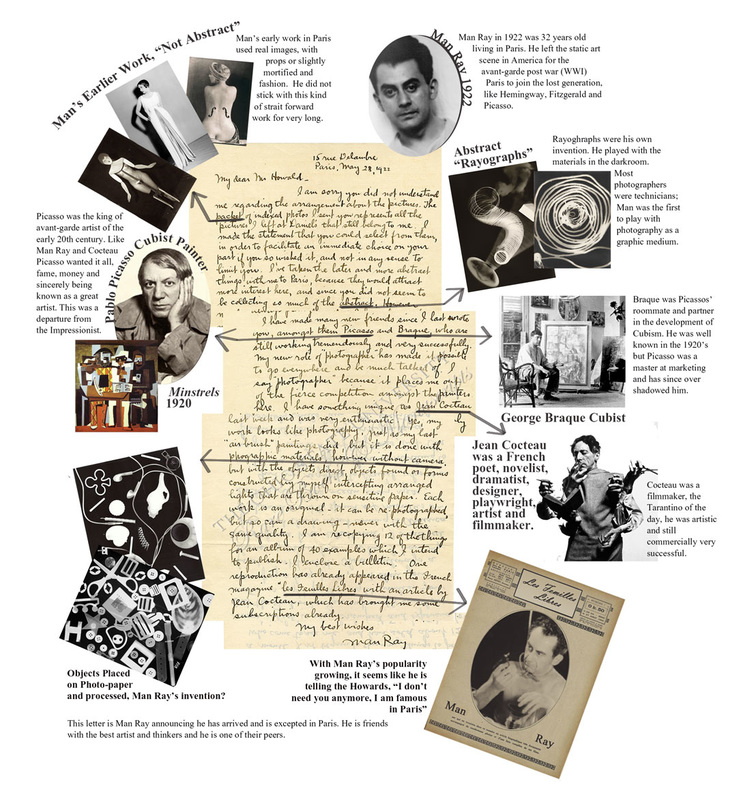 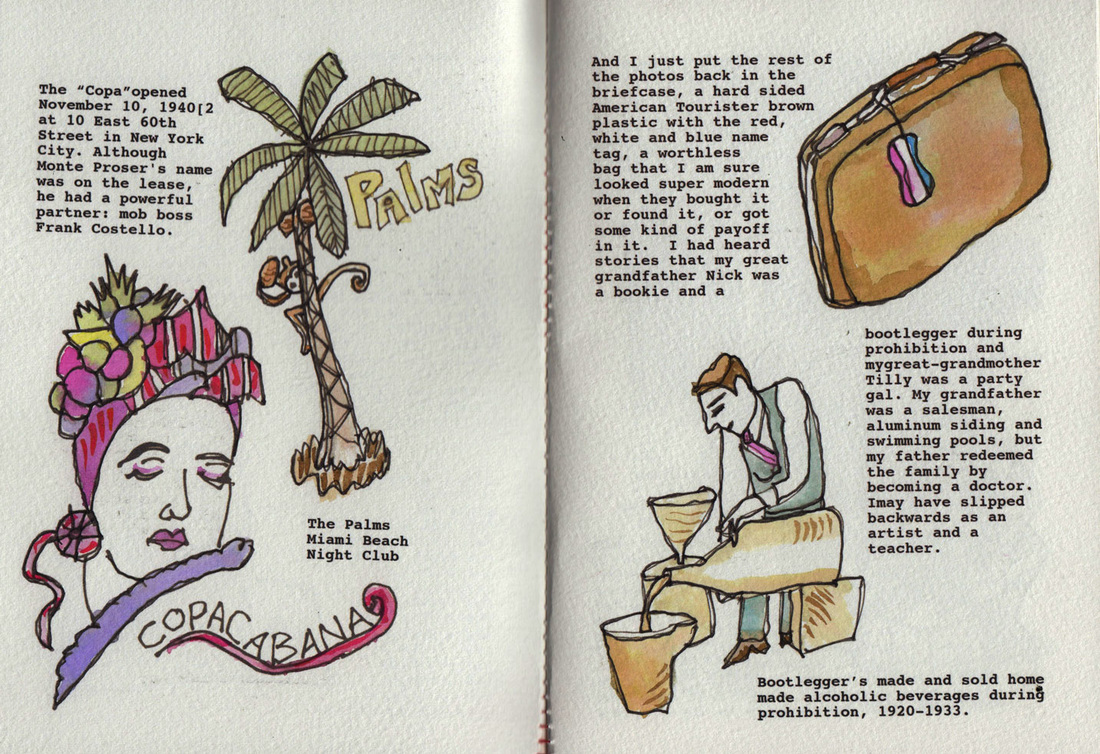 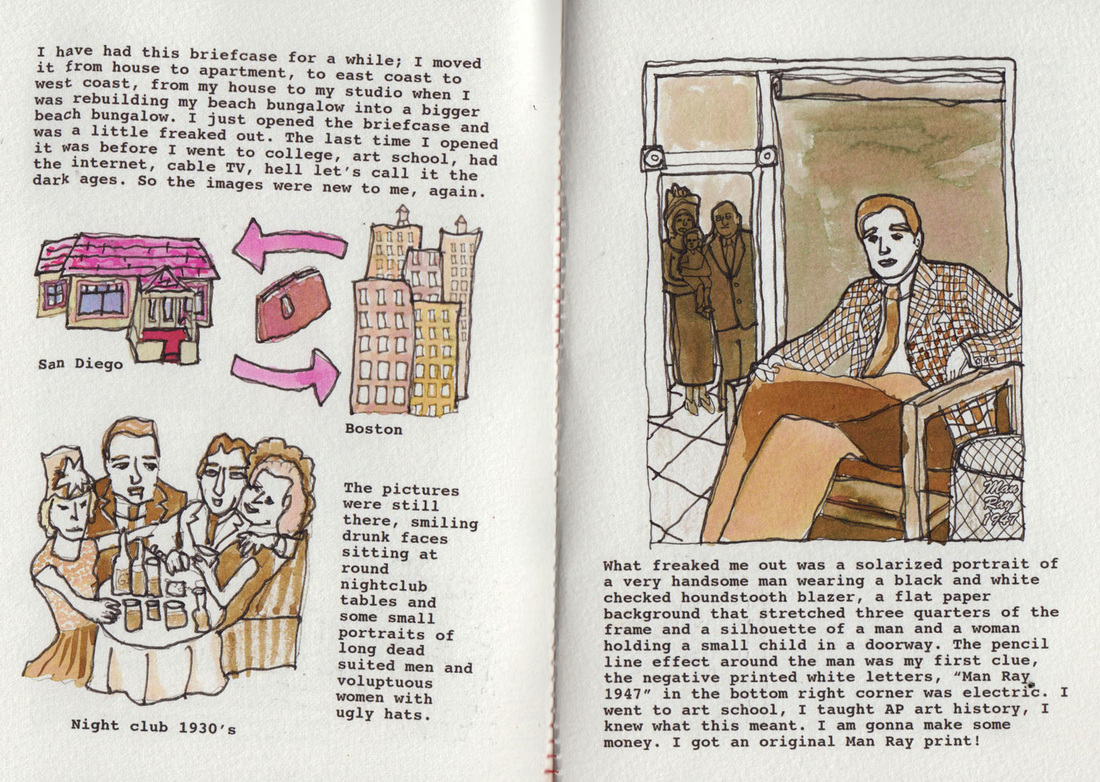 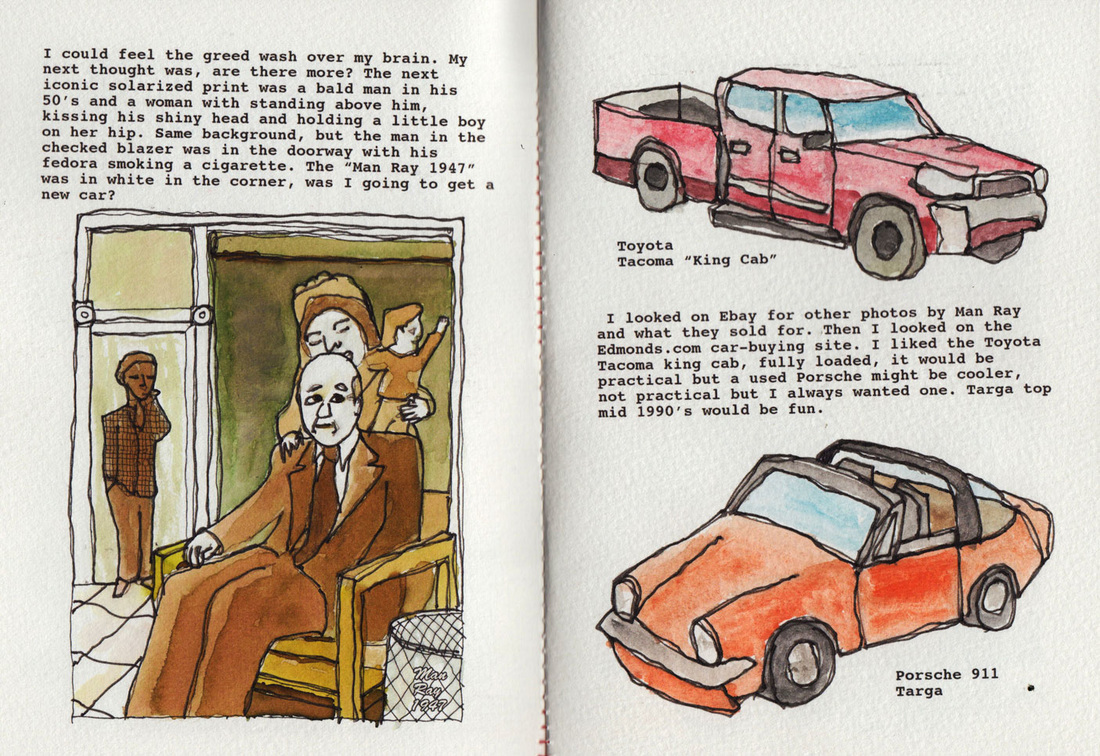 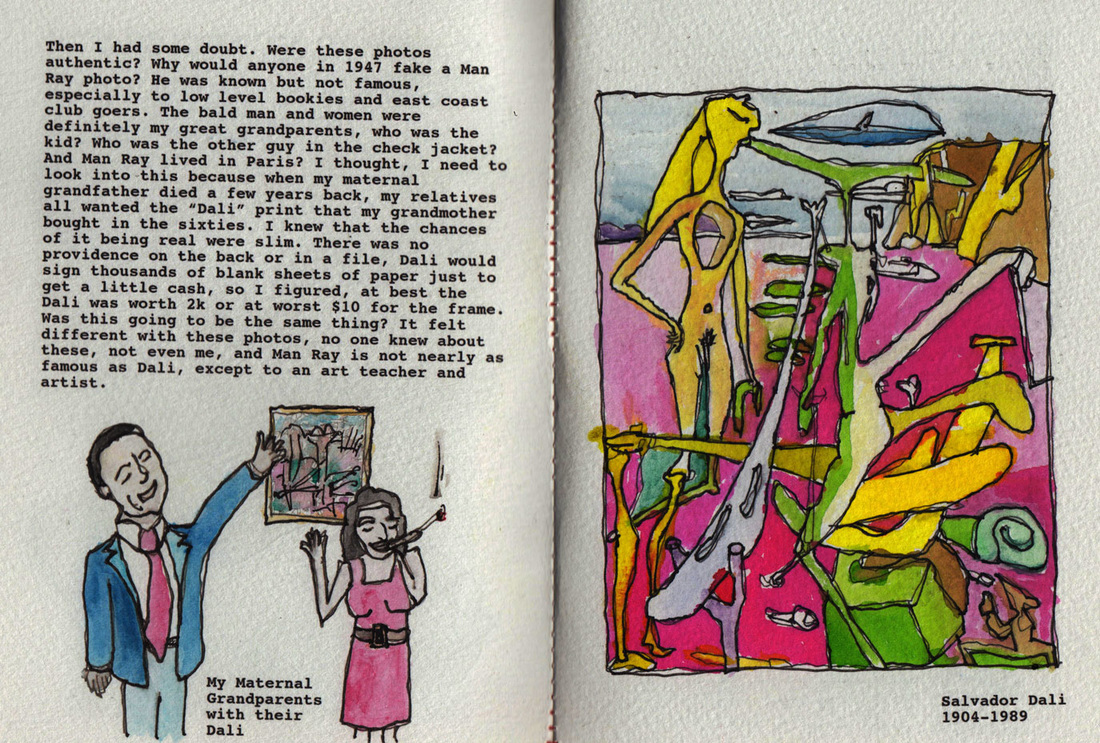 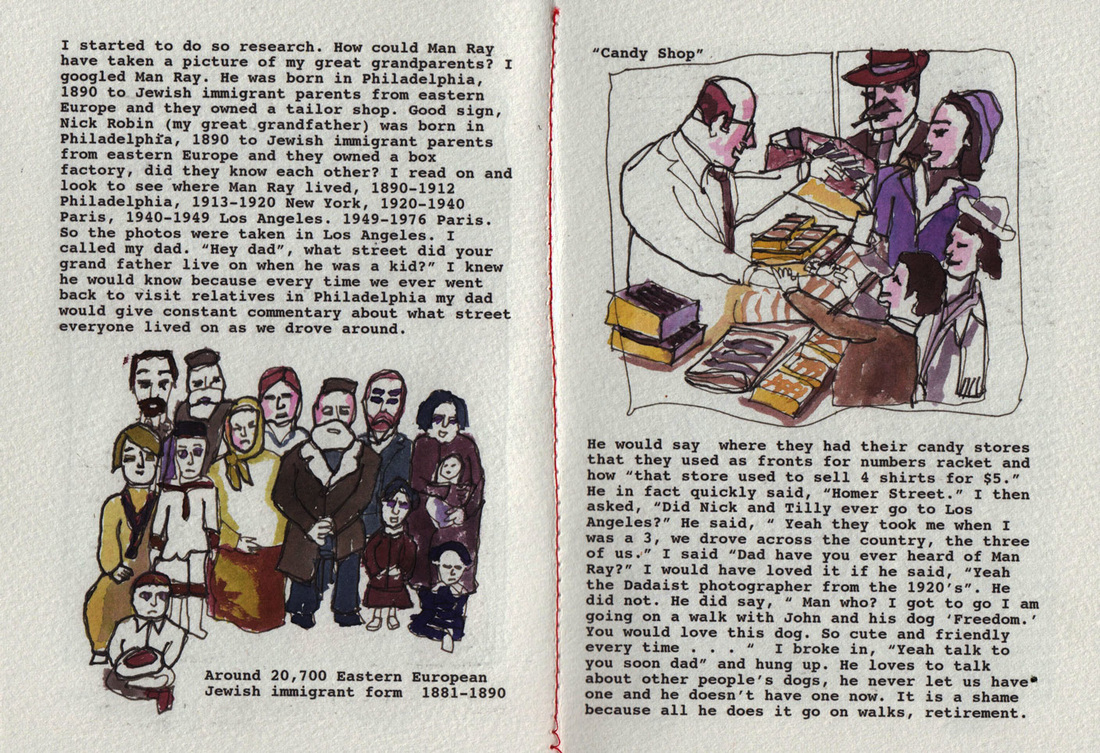 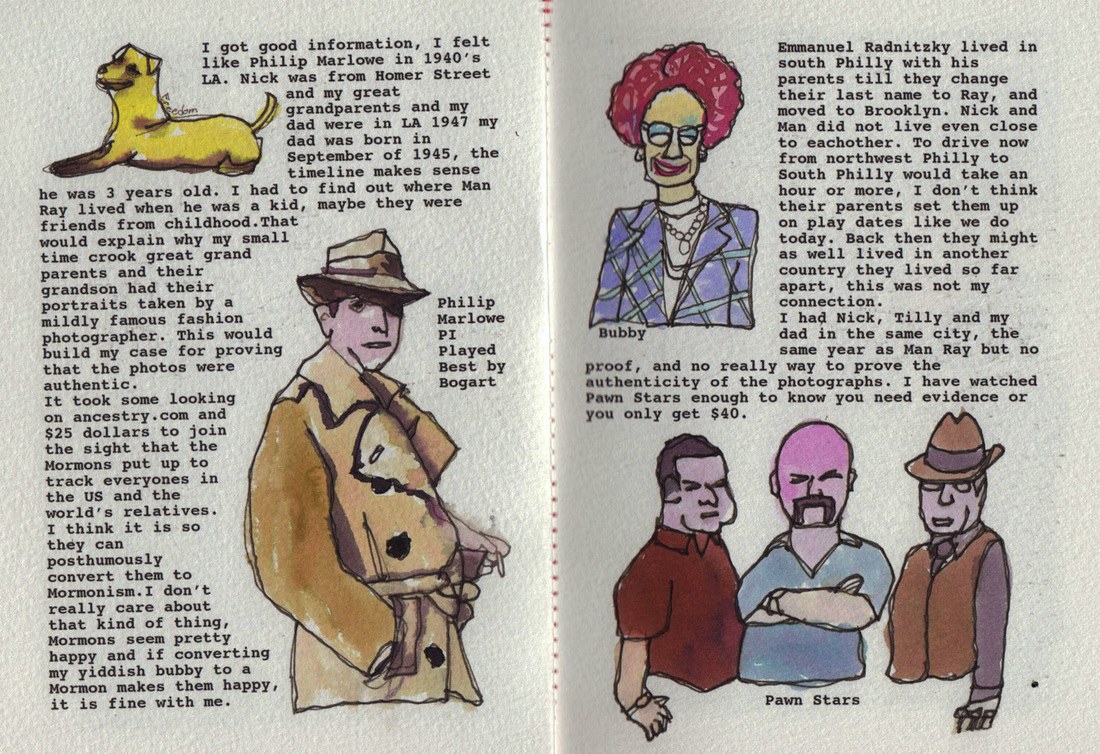 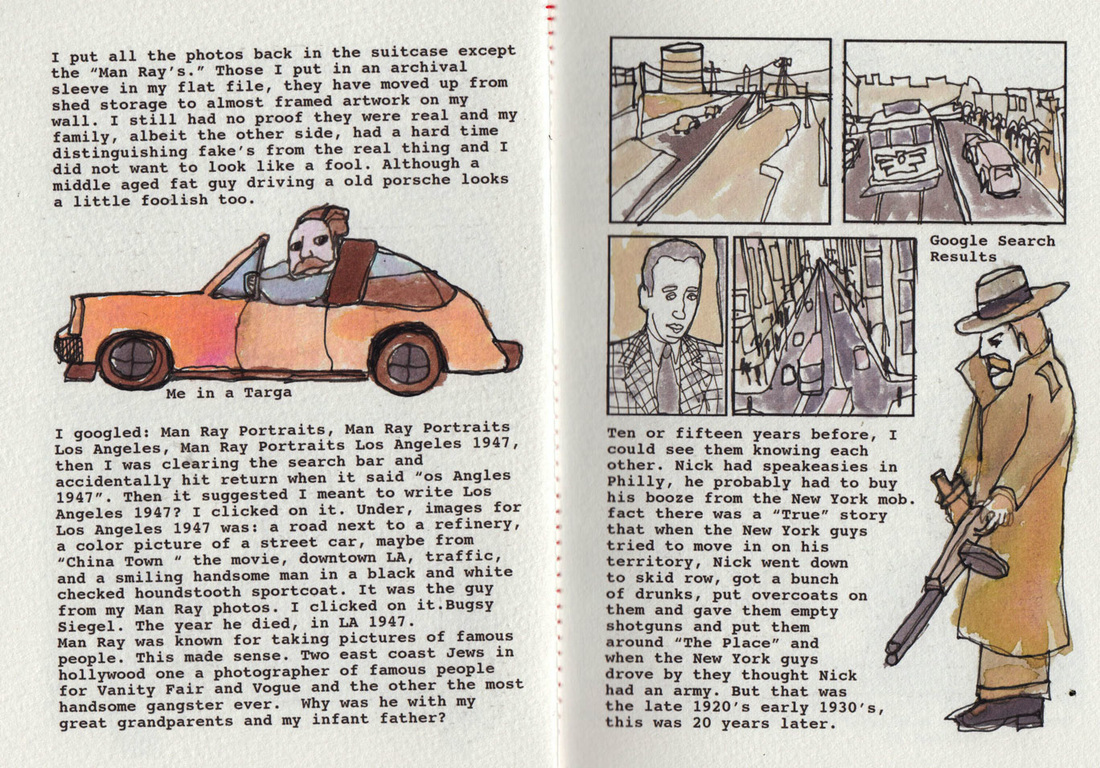 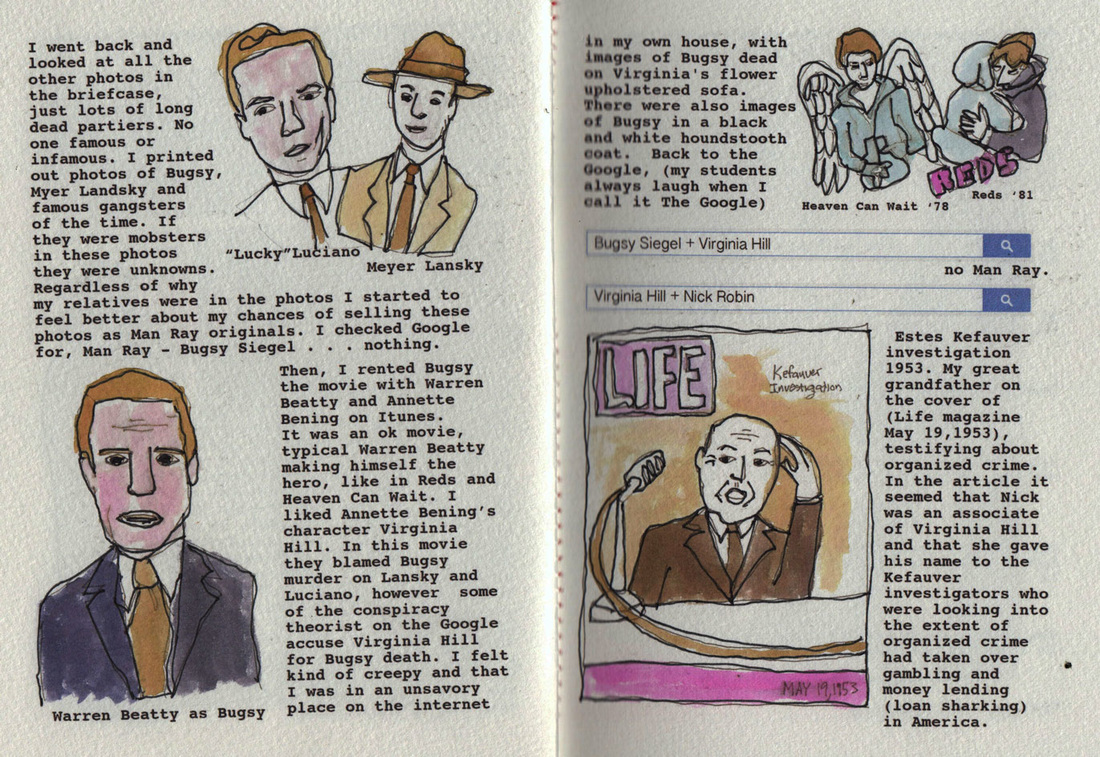 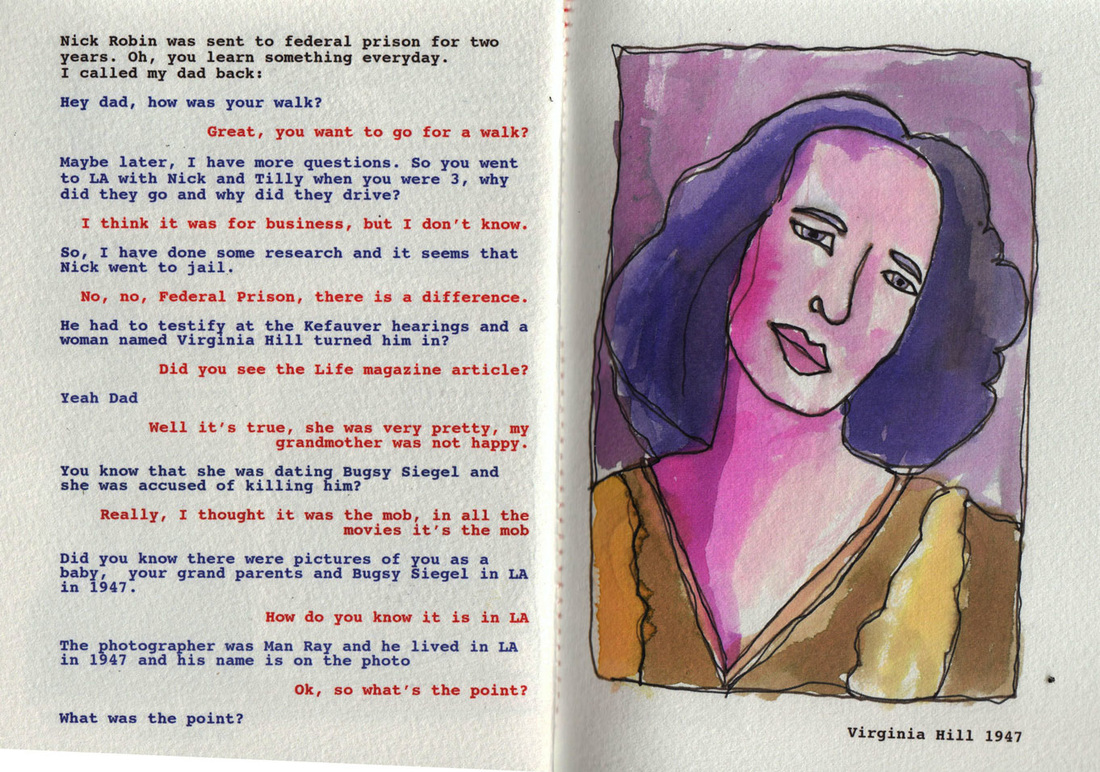 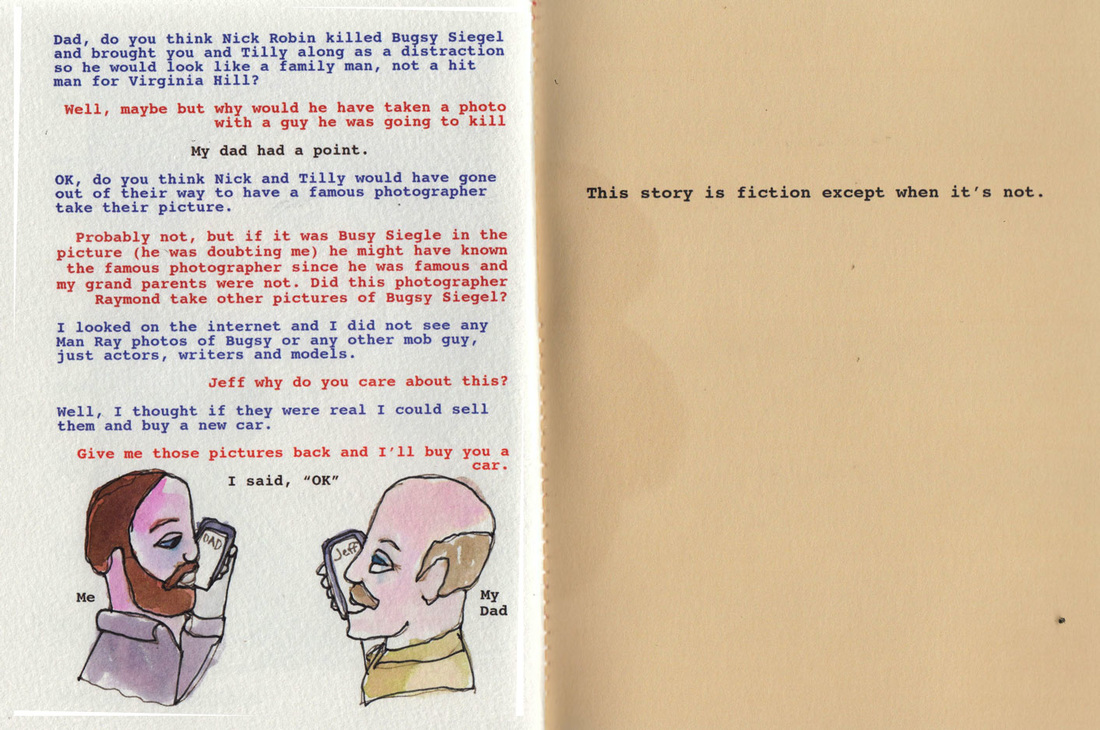 My Box and Artifact