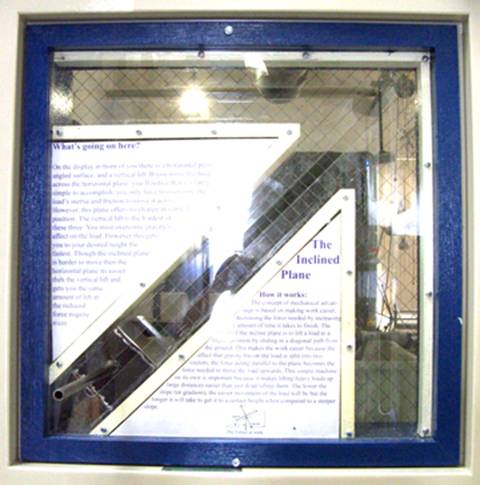 How it works:
The concept of mechanical advantage is based on making work easier by decreasing force needed by increasing the amount of time it takes to finish. The goal of the incline plane is to lift a load to a higher position by sliding in a diagonal path from the ground. This makes the work easier because the affect that gravity has on the load is split into two vectors, the force acting parallel to the plane becomes the force needed to move the load upwards. This simple machine on its own is important because it makes lifting heavy loads up large distances easier than just dead-lifting them. The lower the slope (or gradient), the easier movement of the load will be but the longer it will take to get it to a certain height when compared to a steeper slope.

What's going on here?
On the display in front of you there is a horizontal plane, an angled surface, and a vertical lift. If you move the load across the horizontal plane, you'll notice that it's fairly simple to accomplish, you only have to overcome the loads inertia and friction to move it across. However, this plane offers no change in vertical position. The vertical lift is the hardest of these three. You must overcome gravity's affect on the load. However this gets you to your desired height the fastest. Though the inclined plane is harder to move then the horizontal plane its easier then the vertical lift and gets you the same amount of lift at the reduced force requirement.